Aaron was one of four clean sheets. His rival for the Wheelspin Championship, Dean Partington, was 5th overall after dropping 3 on Guys Hill. Tied on 62 points its down to the wire on The Camel Classic, the last event of the year.

First held in 1946 this was the 70th anniversary of the AllenTrial. Its a testimony to the event and its organisers that in a year of low entries a near capacity number of cars gathered at The Bull in Hindon on 27 November.

The Allen can be a very wet trial but not this year. There had been some rain in the days leading up to the event but the day itself was dry.

Kevin Sharp was the only one of the seven Suzuki X90’s to join Aaron and David Haizelden on a clean in their Reliant Scimitars. One of the X90’s was in unfamiliar hands. Barry Redmayne has acquired one to get a bit more comfort than is provided by his Class Eight Liege, which also has a 1600 four cylinder Suzuki engine.

After Little Uplands came the challenge of Guys Hill

Straight, tree rooty and slippery, with a restart for the higher classes. Only Tris White (Troll) and Gary Browning (Fugitive) got away. Wheelspin contender Dean Partington dropped his only marks of the event here, which would result in fifth place overall and may prove significant for his championship ambitions. Guys wasn’t that easy for the non-starters either and a mere handful saw the summit.

The Yellow and Red categories had separate restarts on Travers, which has become rougher in recent years. There had been a few retirements already, including Adrian Tucker-Peake who had an engine mount fail on his MGF. 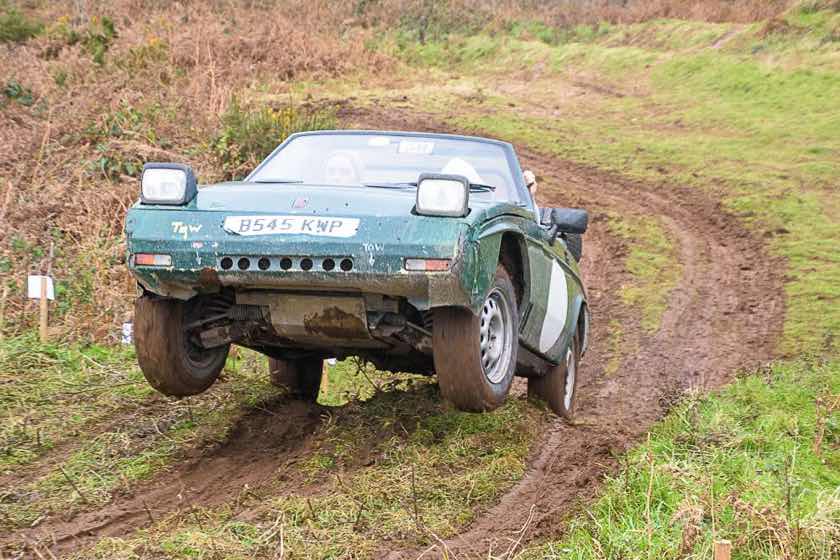 The familiar Ubley Woods sections lay at the top of Travers

And they were remarkably dry this year. Never less the Class 8 restart on Ubley Wood 2 was very tricky and Dean Partington was the only one to succeed.

After the lunch halt at Chew Valley lake there was a Special Test and Observed section at Burledge.

The track has changed a lot since it was resurfaced some years ago, These days the section has moved up the hill and is all about a restart for all on polished stones, watched over by the local farmer who enjoys spectating on the trial.

Sticker Martins Escort didn’t seem to be running to well here and he was to retire before the finish.

The three sections in the woods at Frys Bottom went well and were popular with the competitors.

Only the last one took its toll on the results but didn’t have an impact on the final tally.

There was only John Walker left now.

This long rutted section is normally tackled in the dark by the later numbers but not this year as even the course closing Land Rovers went up as dusk fell.

At the finish there were were four clean sheets.

Bill Bennett in his Class 2 MG J2, Matt Facey with his Class 3 BMW and Aaron and David Haizelden in their Class Five Reliant Scimitars. Overall victory went to Aaron who was significantly faster on the special tests.